Could Tarot Cards possibly have anything to do with Continuing Creation, the Growing> Organizing> Direction of the Cosmos?

At first look it seems that the two are completely different.  The Book of Continuing Creation is a Spiritual Path based on Nature, Reason, and Science.  It consists of 24 Chapters (Essays) having to do with evolution, mathematics, philosophy and biology. Tarot Cards don’t fit into any of those serious intellectual disciplines.

Tarot cards are fanciful images printed on cards that gypsies use to “tell fortunes,” right?  Yes, that’s true, but the Tarot images are part of western culture, and we know that culture is an evolutionary product of human beings.  As such, Tarot can be studied using the sciences of anthropology, psychology, and sociology.  These are the same  disciplines we use to analyze and explain art, literature, and music.

Sure, unprincipled, cavalier fortune tellers can use the Tarot to tell people what they want to hear about themselves; just to get a fee out of those customers without disappointing them.

But ethical Tarot readers do not play up to clients.  Rather, they read the card according to their historical cultural meanings, and also according to their sequentially dealt positions on a traditional layout or “spread,” (such as the Celtic Cross Spread) of the cards on a table.  So a card in the center of a Celtic Cross Spread represents the Present; the card at the left, the Past; and the right, the Near Future; and so on.

As in today’s playing cards, there are four Tarot card suits. Each suit runs from Ace, 2, 3,…10 plus the Page, Knight, Queen, and King. The Jack in modern playing cards combines the Tarot’s Page and Knight. Each Tarot suit also has distinctive characteristics and connotations commonly held to be as follows:[2]

The numbers on the cards are indicators of “states of being:” The Ace means Unity; #2 represents Antithesis, #3 is Synthesis; #4 is Completion, #5 stands for Conflict; #6 is Reconciliation; #7 is Limitation; #8 is Expansion; #9 indicates Integration; and #10 stands for Culmination. These number cards have less influence or “power” than the “Major Arcana cards,” which we discuss next.

In addition to the Four Suits, Tarot decks have an additional 22 cards called the “Trumps” or the “Major Arcana” cards.  Each Trump card corresponds to a typical character in the folklore of medieval Western culture.

Below are the 22 Trumps: Note: There is no ranking of the Major Arcana; all the Trumps have equal “power.” 1 Cynthia Giles, The Tarot: History, Mystery, and Lore, 1992, Paragon House, p. XV. [/note}

A majority of the Tarot Trumps line up pretty well with Carl Jung’s 12 psychological “archetypes.” Jung thought that each of us tends to have one dominant archetype that dominates our personality. He defined twelve primary archetypes that represent the range of basic human motivations. Jung’s 12 Archetypes are: Ruler, Creator/Artist, Innocent, Sage, Explorer, Outlaw, Magician, Hero, Lover, Jester, Everyman, and Caregiver.

The 22 Major Arcana are quite diverse, and therefore more “human” than the fictionally perfected characters of Jesus, Buddha, or Muhammad. The Tarot Trumps are more like the ancient pantheons of India, Norse-land, Greece, or Rome, where the gods and goddesses had many supernatural powers, but also many human foibles. 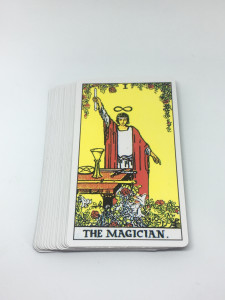 A layout of the Tarot cards can be seen as a kind of “short story,” wherein the Inquirer sees the Trump characters as similar to people and situations in his or her own life. In the same way, the Tarot layout is similar to a video game or toy characters —  like “Barbie and Ken” or the “Seven Dwarfs.”)

The Tarot cards most remind us of the Western European fairy tales we heard as children.  Both cultural mediums have magicians, fools, kings, and queens. Many folk traditions, including Native American traditions, also have analogous figures, including the shaman or medicine man as a parallel to the Tarot’s Magician.

Many cultures include fortune-telling in their traditions. The Ancient Greeks would consult the oracle at Delphi, who, over the centuries, saw the future in laurel leaves and cave vapors.  European cultures developed palm reading, reading of the runes, and using the Tarot as their mediums for divination.

Few modern people take the predictive powers of the Tarot seriously. The traditional mandalas laboriously sand-painted by Tibetan Buddhist monks are taken semi-seriously as active meditations, even by non-believers. Thoughtful and knowledgeable contemplations of classic Tarot spreads should enjoy an equal reputation.

The historical roots of the Tarot, and its evolution over the years, are superbly described in a marvelous work of cultural history by Cynthia Giles, entitled The Tarot: History, Mystery, and Lore. Whatever your interest in the Tarot may be (from card-reading to cultural anthropology, this is the book for you to read.  Dr. Giles holds a Ph.D. in the Humanities from the University of Texas.

We Welcome Your Comments & Suggestions Below:
If you would like us to email you a PDF version of an Essay, just let us know.
Your email address will not be published. Required fields are marked.