This Essay is part of…
The Book of Continuing Creation
A Spiritual Path Based on Nature, Reason, & Science
(without any myths or miracle stories)
By J.X. Mason 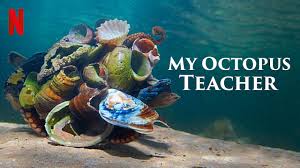 This Octopus Uses its Suckers to “Armor” Itself in Old  Seashells

“My Octopus Teacher” – The Best Nature Film Ever !

Today, I want to sing the praises of a new nature documentary now showing on NETFLIX, and also available online.  the documentary film is called, My Octopus Teacher.

If you look closely at our opening photograph, you will discern small portions of the legs of an Octopus that is literally covered in sea shells. This octopus has rolled itself into a ball, with most of it tentacle suckers facing outward. Then it rolled itself across a bed of empty seashells lying on the seafloor, picking them up with its multitude of suckers. Amazingly, the Octopus has done this in order to camoflage itself from a small species of shark  (the pyjama shark), that hunts it mercilessly in this part of the sea.

Of course, as many of us know, nearly every octopus is already capable of excellent camouflage by changing its skin color to match its local surroundings; not to mention its ability to squeeze its body to fit into small crevices in undersea rocks and coral.  However, the pyjama shark sees very poorly and relies on its terrific ability to smelll its prey.

Perhaps this octopus uses the sea shells to mask its odor. Or, it is possible that the shells are being used as a kind of “body armor,” denying the shark easy places to sink its teeth.  Whatever the reason, the ability to armor itself is clear evidence that octopuses have a high degree of intelligence. This species of octopus lives only for one year, and is a solitary creature startion from its birth as one of myriad fertilized eggs floating in the open sea.  This strongly implies that this octopus did not learn the armoring technique from its mother. Nor was it likely learned from its peers, since octopuses live alone.  If so, then this octopus has used intelligence and creativity to construct its suit of armor.

The film also shows the octopus using its brain to position itself in kelp plants above a cruising shark, and then to gently drop onto the shark’s back. With the octopus on its back, the shark is unable to find its prey, even though the shark’s sense of smell tells him that the octopus must be very close by his prey must be. (How frustrating that must be for the shark!)

All these behaviors were film-documented and narrated off the coast of South Africa by free-diver Craig Foster, in his film, “My Octopus Teacher,” now playing on NETFLIX, and on other online venues. The film even has its own Wikipedia page — My Octopus Teacher.  Wikipedia writes, “The film shows how, in 2010, Foster began freediving in a old underwater kelp forest at the tip of South Africa. He started to film his experiences and, in time, a curious young female octopus captured his attention. By visiting her den and tracking her movements every day for months, he won the animal’s trust. In the film, Foster describes the impact on his life of his relationship with the octopus.”

The film shows a later shark attack in which the octopus loses an arm, and then retreats to her den to recover, eventually regenerating a new arm. Still later, after mating with another octopus and producing a large number of eggs, at the end of its one-year life, our Octopus dies and the film shows a shark taking her body away.

Press coverage for this documentary film has been very positive and very wide. The New Scientist wrote, “Before the viewer’s eyes, the octopus adapts her crab-hunting strategy for lobster [instead of her more usual crab]…. shape-shifts to resemble seaweed and rocks, and otherwise applies her intelligence and creativity to survive.”

The Cut wrote, “The unlikely relationship between the human photographer and the octopus is a mentorship on the fragility of life and man’s connection to nature. Their interaction culminates when the octopus swims up to Foster and lands on his chest, in a display of inter-species connection.”

Why is this film important for The Book of Continuing Creation? Because it shows that Nature’s tendency toward complexity, including intelligence, while frequently seen in vertebrates — such and the porpoise, raven, elephant, chimpanzee, and human —  has also taken place in a widely different branch (class) of the Tree of life — the phylum of the mollusks, which includes snails, slugs, and cephalopods, one of which is the octopus.

There also exists a much, much simpler creature known as the slime mold, which is perhaps even more remarkable than the octopus.  The slime mold is a single-celled creature which, when food is scarce, self-assembles into a much larger colony.

This slime mold colony is capable of collectively hunting for food as if it were a larger animal.  Without any brain, or even any neurons, the assembled colony demonstrates intelligence by collectively make decisions, including efficiently searching through a maze to find food.  The slime mold thus illustrates the Process of evolutionary Emergence.  In this case, it demonstrates the emergence, or self-organization, of an early form of intelligence.

For more on the slime mold, see our essay, Complexity and Continuing Creation, which features a photograph of a very beautiful slime mold colony on page 1.  In addition, the NOVA television series on science has recently premiered a new hour-long narrated film episode titled The Secret Mind of Slime, which is now viewable on public television websites.

For more on Emergence, see our Essay, The Processes of Evolution – And Their Spiritual Meaning.

> Geologic & Chemical Origin of Life
> “My Octopus Teacher” – Best Nature Film EVER
> Quick Reads on The Origin of Life
> Was Trump a Good Leader? Is Biden?
> The “Tao” of Continuing Creation
> Evaluating Taoism and Zen
> What Is Spirituality?
> Mindfulness While Doing Skilled Labor
> Get Her Phone Number
> How Many “Missing Links” Are There Now?
> The Processes of Evolution — and their meaning
> Wisdom from the Tao Te Ching