Well, we don’t regard Mother Nature as a goddess, spirit, or saint.  We would never pray to Mother Nature (or to any other being, for that matter!)  For us, Mother Nature is a personification, an anthropomorphic symbol, of Nature itself.

It’s a bit sad to note that many Americans are most familiar with Mother Nature as a character in a 1977 margarine commercial, who exclaims, “It’s not nice to fool Mother Nature!,” letting loose thunder and lightning.

Historically, however, Mother Nature did evolve from the humankind’s earliest conception of goddesses as a feminine incarnation of fertility, nurturing, and successful harvests. Often their creative powers extended to represent all life-on-Earth. Thus, we have the concept of “Mother Earth.” For example, the ancient Greeks had the “wide-bosomed” Goddess Gaia, who was the ancestral mother of all life on Earth.

The popular mind unfortunately sees Evolution as raw competition (“red in tooth and claw”). But our Continuing Creation website shows that cooperation is just as important in the scientific processes of evolution, going clear back to when the earliest single-celled creatures joined together to form communities and also fungi (which comprise an entire biological kingdom of their own).  Until recently, Western Civilizations have viewed their masculine Gods as dominant, adventurous, and war-like. They symbolize the competition side of evolution. Their feminine Goddesses symbolize the cooperation side of evolution.

The Catholic Church has always been firmly divided by gender – women are (still) not allowed to be priests. But early Christians so missed having a female deity who could comfort them, that the Catholic Church decided to promote what many historians call “The Cult of the Virgin Mary.” In 1913, the historian Henry Adams wrote Mont-Saint-Michel and Chartres – a beautiful description of how this trend flowered in the 13th century. Adams says that in that century, Catholicism’s division by gender was even captured in stonework, as seen in the contrast between the masculine, spartan Mont-Saint-Michel Abbey; and the feminine, welcoming Chartres Cathedral. 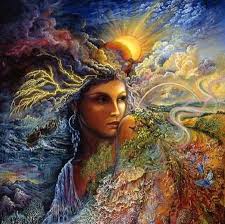 A segment of the modern environmental movement has adopted Gaia as their symbol. This adoption started with the 1979 book by Dr. James Lovelock called Gaia: A New Look at Life on Earth, which was quickly supported by research from the biologist Lynn Margulis. The Gaia Hypothesis proposes that living organisms and inorganic material are all part of a single dynamical system that shapes the Earth’s biosphere and maintains the Earth as a fit environment for life. Some Gaia Theorists view the Earth itself as a giant living organism having self-regulatory functions.

The Gaia theory clearly recognizes the evolutionary power of both competition and cooperation. Therefore, we can say that Gaia is a better personification of Continuing Creation than Mother Nature. However, most of the artistic images depicting Mother Nature and Mother Earth can also stand as representations of Gaia.

We Welcome Your Comments & Suggestions Below:
If you would like us to email you a PDF version of an Essay, just let us know.
Your email address will not be published. Required fields are marked.